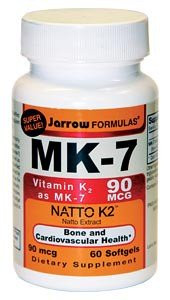 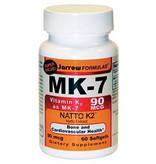 Jarrow Formulas® MK-7 is an extract from genetically unmodified soybeans fermented with Bacillus subtilus natto, that is concentrated without solvents. MK-7, also known as Menaquinone-7, is a bioactive form of vitamin K2. This extract from Natto is ten times better absorbed than K1 from spinach. While vitamin K1 is primarily absorbed by the liver, MK-7 is absorbed by other tissues, such as the arterial wall, pancreas and testes. Vitamin K functions primarily as a co-factor for an enzyme responsible for carboxylation of specific bone proteins, such as osteocalcin and Matrix Glaprotein (MGP). MGP is a strong inhibitor of vascular calcification. Impairment of the function of osteocalcin and MGP, due to incomplete carboxylation, results in an increased risk for low bone density and vascular calcification, respectively.